During the first DCDSC meeting of 2019 (report on that forthcoming), I had the opportunity to ask Mayor Muriel Bowser about an incident in Ward 6 involving the MPD.

ANC Commissioner Denise Rucker Krepp had sought access to body camera footage worn by MPD officers involved in a controversial December 22nd stop of several teenagers in the Capitol Hill neighborhood. MPD responded by issuing her an invoice for more than $5,000 before she could view the footage.

Fox5’s Evan Lambert reported on the commissioner’s request. You can view that video here.

My question and the Mayor’s response can be heard in this video, captured by Black Lives Matter DC. [Scroll ahead to 31:32 for the exchange. A transcript is also available in text below.]

As it turns out, the Mayor had offered some thoughts on the incident to Fox5 the same night of our meeting, and her response seemed markedly different than what she gave before the DCDSC.

On January 10th, Commissioner Krepp tweeted out an update:

Needless to say, a lot of folks are confused about the policies governing the MPD’s body camera program and why a huge fee would be charged to an elected official trying to see what happened in her neighborhood.

To get some clarity, today I sent the following letter to Mayor Bowser, requesting clarification. I will update this post if/when I receive a response. 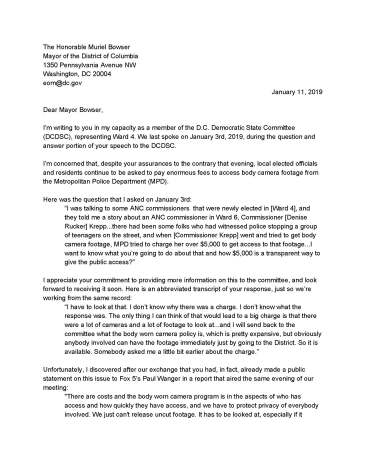 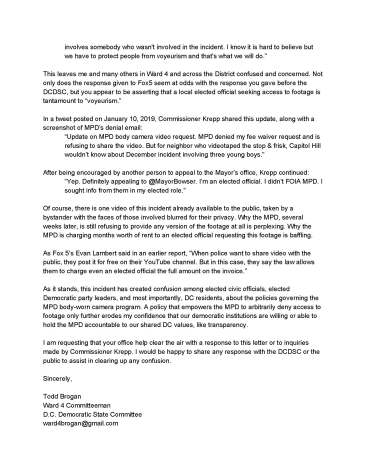 For those unable to open or view the image, here is the full text of the letter:

I’m writing to you in my capacity as a member of the D.C. Democratic State Committee (DCDSC), representing Ward 4. We last spoke on January 3rd, 2019, during the question and answer portion of your speech to the DCDSC.

I’m concerned that, despite your assurances to the contrary that evening, local elected officials and residents continue to be asked to pay enormous fees to access body camera footage from the Metropolitan Police Department (MPD).

Here was the question that I asked on January 3rd:

“I was talking to some ANC commissioners  that were newly elected in [Ward 4], and they told me a story about an ANC commissioner in Ward 6, Commissioner [Denise Rucker] Krepp…there had been some folks who had witnessed police stopping a group of teenagers on the street, and when [Commissioner Krepp] went and tried to get body camera footage, MPD tried to charge her over $5,000 to get access to that footage…I want to know what you’re going to do about that and how $5,000 is a transparent way to give the public access?”

I appreciate your commitment to providing more information on this to the committee, and look forward to receiving it soon. Here is an abbreviated transcript of your response, just so we’re working from the same record:

“I have to look at that. I don’t know why there was a charge. I don’t know what the response was. The only thing I can think of that would lead to a big charge is that there were a lot of cameras and a lot of footage to look at…and I will send back to the committee what the body worn camera policy is, which is pretty expansive, but obviously anybody involved can have the footage immediately just by going to the District. So it is available. Somebody asked me a little bit earlier about the charge.”

Unfortunately, I discovered after our exchange that you had, in fact, already made a public statement on this issue to Fox 5’s Paul Wanger in a report that aired the same evening of our meeting:

“There are costs and the body worn camera program is in the aspects of who has access and how quickly they have access, and we have to protect privacy of everybody involved. We just can’t release uncut footage. It has to be looked at, especially if it involves somebody who wasn’t involved in the incident. I know it is hard to believe but we have to protect people from voyeurism and that’s what we will do.”

This leaves me and many others in Ward 4 and across the District confused and concerned. Not only does the response given to Fox5 seem at odds with the response you gave before the DCDSC, but you appear to be asserting that a local elected official seeking access to footage is tantamount to “voyeurism.”

In a tweet posted on January 10, 2019, Commissioner Krepp shared this update, along with a screenshot of MPD’s denial email:

After being encouraged by another person to appeal to the Mayor’s office, Krepp continued:

“Yep. Definitely appealing to @MayorBowser. I’m an elected official. I didn’t FOIA MPD. I sought info from them in my elected role.”

Of course, there is one video of this incident already available to the public, taken by a bystander with the faces of those involved blurred for their privacy. Why the MPD, several weeks later, is still refusing to provide any version of the footage at all is perplexing. Why the MPD is charging months worth of rent to an elected official requesting this footage is baffling.

As Fox 5’s Evan Lambert said in an earlier report, “When police want to share video with the public, they post it for free on their YouTube channel. But in this case, they say the law allows them to charge even an elected official the full amount on the invoice.”

As it stands, this incident has created confusion among elected civic officials, elected Democratic party leaders, and most importantly, DC residents, about the policies governing the MPD body-worn camera program. A policy that empowers the MPD to arbitrarily deny access to footage only further erodes my confidence that our democratic institutions are willing or able to hold the MPD accountable to our shared DC values, like transparency.

I am requesting that your office help clear the air with a response to this letter or to inquiries made by Commissioner Krepp. I would be happy to share any response with the DCDSC or the public to assist in clearing up any confusion.